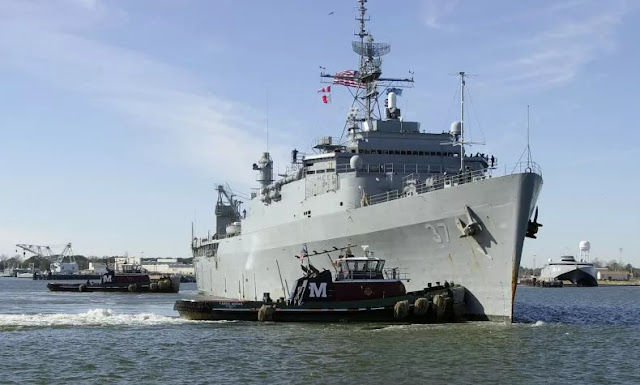 The U.S. Navy released images of a laser coming from the deck of the amphibious transport dock ship, the USS Portland, with video clips showing what appears to be an aerial drone burning.

The location of the test, which took place on May 16, was not revealed by the Navy, but USNI News reported that it took place off Pearl Harbor, Hawaii.

The Navy said the use of the Laser Weapon System Demonstrator (LWSD) on a Pacific Fleet ship "is the first system-level implementation of a high-energy class solid-state laser."

The weapon was not revealed either, but it is believed to be a 150-kilowatt laser, according to a report from the International Institute for Strategic Studies.

"With this new advanced capability, we are redefining war at sea for the Navy Capt. Karrey Sanders, commanding officer of the USS Portland, said in the statement. "By conducting advanced at sea tests against UAVs and small crafts, we will gain valuable information on the capabilities of the Solid State Laser Weapons System Demonstrator against potential threats.

"The Solid State Laser Weapons System Demonstrator is a unique capability the Portland gets to test and operate for the Navy, while paving the way for future weapons systems."

The Navy says it has been developing directed-energy weapons (DEWs) to include lasers since the 1960s. Their ability to convert chemical or electrical energy to radiated energy which can focus on a target, make them an effective weapon.

The USS Portland was tapped to be the first ship to test the LWSD at sea, drawing on the experience of tests of the 30-kilowatt Laser Weapon System (LaWS) which were carried out on the staging base USS Ponce in the U.S. 5th Fleet area of operations between 2014 to 2017, USNI reported.

Lieutenant Cale Hughes, a laser weapons system officer, told CNN in 2017 that the 30-kilowatt laser weapon on board the Ponce, which has since been retired from service, was like "throwing massive amounts of photons at an incoming object," allowing the Navy to "engage the targets at the speed of light."

The Navy is also developing a less powerful laser weapon, the High Energy Laser and Integrated Optical-dazzler and Surveillance (HELIOS), which is expected to reach 60 kilowatts and be installed on vessels like fielded destroyers, USNI reported.