Three broad approaches represent how the presence or source of danger is modeled as a risk in relation to vulnerable receptors. This implies that the source and receptor must be identified and that there are several models of how the source impacts the receptor. Sources can be identified as specific objects (chimneys, waste disposal), zones (unstable slopes that can cause certain landslides, seepage areas, fault lines), or diffuse throughout the area (strong winds) of events, heavy rainstorms). 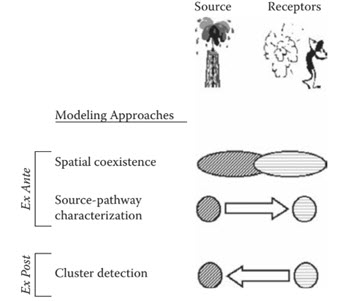 Generally, the first of these would be classified as point sources and the latter two as nonpoint sources. Difficulties arise over such an inductive classification because a nonpoint source in one area may originate from a point source in another. Thus, general air pollution in one area may originate from specific factories elsewhere. Depending on the scale of study, it may not be possible to model all the individual point sources, but treat the aggregate effect as a nonpoint source. Point and nonpoint sources need to be treated differently in GIS (point, line, polygon, or field) and are likely to influence the form of analysis. Receptors can be people, the flora and fauna, properties and land, again with different ways of representing these in GIS with consequences for the modeling. It is, however, the modeling of the means by which the source has the ability to impact the receptors that is distinctive within the taxonomy:

statistical techniques, and artificial neural networks (ANN) to search for space–time clusters in the event occurrences among the receptors
that indicate that something has gone wrong.
Before coming to the case studies, we need to explore the difference between environmental modeling within GIS and environmental modeling with GIS. In the former, the entire environmental model is realized within GIS. In the latter case, GIS are linked with external models. Some would feel the distinction is unimportant; after all, it is possible to carry out the complete taxonomy of approaches within GIS. Well, yes and no. Both spatial coexistence modeling and cluster detection are heavily weighted in their approaches toward the spatial dimension of phenomena and are eminently suitable to be carried out in GIS or GIS-like modules. One problem here is that most commercial GIS software are poorly endowed, if at all, with cluster detection methods and that these need to be programmed either as externally linked programs or using the GIS internal macro language capability.

Source–pathway characterization is somewhat different. While fairly simple transport processes, for the most part reliant on routing over topography, can be programmed as internal macros, the implementation of efficient finite element method (FEM), for example, is beyond these macro tools despite their growing sophistication. For many source–pathway characterization approaches, it still remains far more satisfactory to use specific environmental simulation software with GIS as an important complementary tool.

This combined approach has grown in popularity due to the “dual recognition of environmental problems with compelling spatial properties, but also with a complexity that cannot be adequately explored through interrogation and recombination of geographic data alone” (Clarke et al., 2000). But, there is another important reason. There are many instances, for example, in engineering orientated applications where a client mandates the use of certain classes of model for which formal validation is available. In some places, such models are used as de facto standards and one’s own macro implemented in GIS isn’t going to cut much ice. They may even be quite specific about the nature of GIS software being used … and the database. This is a form of quality assurance where specification of tools of known quality means that the tools are not going to be the weakest link and are capable of supporting good quality work. Under these circumstances, tool coupling has to take place.
#GIS #Komputer #Modeling Approaches in GIS
Bagikan
Komentar