This is the most common approach to GIS and environmental modeling and has been particularly popular throughout the history of GIS. After all, what is GIS good at—buffering, topological overlay, map algebra—all of which can be used to establish the spatial and temporal coexistence of sources and receptors. The transport mechanism remains implicit and largely unmodeled. If there is some spatial distance to be covered, this is usually modeled through buffering as a surrogate for the specific transport process at work. But spatial coexistence can also relate to the way in which variables come together spatially to form combinations that produce a hazard (factor mapping). Then, using spatial coexistence again with possible receptors, vulnerability and risk are established. 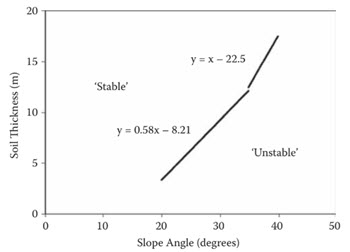 On the basis of a conceptual model arising from an empirically inductive understanding of the factors that promote landsliding in the specific study area, then by assuming these can be mapped in GIS, a combination of overlay and Boolean selection reveals those areas where a hazard exists. By further overlaying this result with the land cover layer, it would then be possible to identify which land uses were vulnerable, and if this included the class “village,” then which people were vulnerable. If necessary, buffering of the unstable areas would indicate any village on or dangerously near unstable terrain.

Mason and Rosenbaum (2002) provide an example from the Piemonte region of northwest Italy where, because of the nature of the geology, block slides develop along discontinuities and bedding planes (these weaknesses within the soil allow blocks of soil and rock to detach as landslides during heavy rainfall or earth tremors). Thus, slope failure is most likely to occur where the angle and aspect of a slope closely conforms to the dip and dip direction of the discontinuities. Using an equation in map algebra that resolves this relationship, Mason and Rosenbaum were able to map factor of safety (FoS) and, hence, hazard where FoS < 1 from slope and aspect raster layers derived from a digital elevation model (DEM). As stated before, such an example is not a universally applicable model, but one empirically developed from field data to reflect the specific conditions in an area. The spatial coexistence approach has also traditionally been used in flood risk studies (e.g., Cotter and Campbell, 1987) where geomorphological features associated with flooding, such as floodplains or flood extents calculated by engineers and hydrologists using simulation software, are overlaid with land use to identify settlements falling within these zones and, therefore, at risk.

The specific case study I would like to take you through in some detail concerns a small reservoir built using an earthfill dam at the head of a valley
as the sole water supply to a small town farther downstream. Any damage to the reservoir could thus have potentially serious consequences for the residents of the town. The owners of the reservoir and their engineers were concerned about the slope stability of the reservoir rim during heavy rainstorm events and during rapid drawdown of the water level. There may be occasions when drawdown of a reservoir is either desirable or necessary. Drawdown is undertaken for periodic safety checks of a dam and other structures associated with a reservoir. It also occurs when the bottom of a reservoir is being scoured through a scour pipe in order to remove some of the accumulated bottom sediments. If a reservoir fills up with sediment, it decreases in water storage capacity and can eventually become useless.

If the drawdown is too rapid, the effect on the side slopes is equivalent to an extreme rainfall event. Because the water table is suddenly lowered causing water to flow out of the saturated slopes, this increases pore water pressure, lowers the FoS below 1 and, thus, causes failure (Chapter 4). Figure 6.2 shows just such a slope failure at another reservoir in the region. Of particular concern to the engineers was the possibility of a large landslide entering the reservoir and causing a sufficiently large wave that would propagate through the reservoir and overtop the dam causing damage to or even failure of the structure. The engineers had carried out some preliminary slope stability calculations of theoretical cross sections and had arrived at an empirical model based on slope angle and soil thickness, summarized in Figure 6.3. The impasse for the engineers was in identifying which parts of the reservoir rim were “unstable” according to the model and which of these slopes might fail in such a way as to generate a large wave.

Seemingly then, can two data layers—slope angle and soil thickness be established? Slope angle should present no problem if a DEM can be constructed, but a soil thickness layer is a bit more challenging, to say the least. A DEM could be readily established using a triangular irregular
network (TIN) data structure (Chapter 2, Figure 2.11(e)) from survey data collected during the construction of the reservoir from which a contour
map could be constructed and checked for accuracy (Figure 6.4(a); this is not the whole of the upper catchment, but only those areas immediately

around the reservoir rim). In this particular instance, the TIN data structure, as a tessellation, was also used to store attributes rather than further decomposing into raster. This was because the TIN was constructed using the theory of “high information” landscape features (Heil and Brych, 1978; Brimicombe, 1985) that produces a consistent representation of topography whereby the TIN elements form meaningful topographic and geomorpho logical units.
#GIS #Komputer #Spatial Coexistence
Bagikan
Komentar