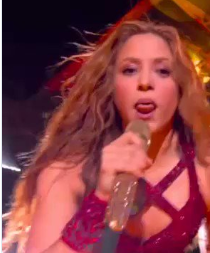 Jennifer Lopez and Shakira teamed up Sunday night to become the first two Latina singers to perform together during a Super Bowl halftime show, and it was a spectacle. Here are five very important questions you might have had from a truly riveting, wildly entertaining performance:

1) Was J-Lo making a statement about her Oscars snub with the pole dancing?

J-Lo had a career-defining performance as a stripper/con woman in “Hustlers,” and there was Oscar buzz for months . . . but then she was left off the list for best supporting actress. So, it’s somewhat reasonable to think that J-Lo might have been making a reference to the movie when she started her set on a pole, kicking things off with “Jenny From the Block,” before launching into other smashes including “Waiting for Tonight” and “Love Don’t Cost a Thing.” Later, she climbed back on the pole for a few more incredibly athletic moves in a silver cutout bodysuit that no doubt sent many viewers scrambling to their phones to ask, “Seriously, how old is J-Lo?!?” (She’s 50, by the way.)

Yes, it was! Readers of the tabloids might know that J-Lo has 11-year-old twins with her ex-husband Marc Anthony, and it was young Emme who took the stage for “Let’s Get Loud” with a children’s choir.

3) So, what will the reaction be to the U.S.A. and Puerto Rico flag moment?

It’s hard to get more polarizing than when musicians make political statements at the Super Bowl — and this one wasn’t subtle: As the choir sang “Born in the U.S.A.,” J-Lo whipped open her U.S.A. flag cape to reveal that the inside was the Puerto Rican flag. As a reminder, before the game, J-Lo said “Two Latinas doing this in this country at this time is just very empowering to us,” while Shakira (who kicked off her portion of the show with “Hola Miami!”) stated, “It’s very important for us to convey a message of unity and also to show what a relevant force the Latin community is in this country.”

In case you didn’t know, Shakira is famous for her rope dancing during “Whenever, Wherever” on tour. And she demonstrated some incredible dance moves on her own as she ticked off hits including “She Wolf” and “Hips Don’t Lie."

Guest stars during the show included J Balvin, who sang “Mi Gente” with J-Lo, and Bad Bunny, who joined Shakira for “I Like It” in an all-silver ensemble that reminded some people of a certain Sacha Baron Cohen character. While we’re guessing that it was a coincidence, social media still had a great deal of fun with the comparison.