China is extending the Lunar New Year holiday for three days and enforcing strict containment measures in an attempt to curb the spread of a new coronavirus that has killed 81 people and infected at more than 2,700. 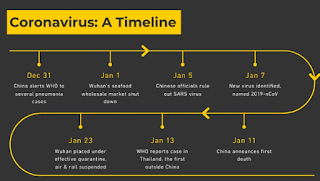 More than 56 million people in almost 20 cities, including Wuhan, the capital of Hubei province where the virus originated, have been affected by travel restrictions, introduced amid fears the transmission rate will balloon as hundreds of millions of Chinese travel during the Lunar New Year celebrations.

Health authorities around the world are taking action to prevent a pandemic as more countries report cases. Confirmed cases have so far been announced in several Asian countries, Europe and North America.

The World Health Organization (WHO) has acknowledged the respiratory illness is an emergency in China but the organisation said on Thursday it was too early to declare the outbreak a public health emergency of international concern.

Here are the latest updates:

"Everyone is awaiting approval for the Iraqis to leave the city," Foreign Ministry Spokesman Ahmed al-Sahaf said in a press release.

He added that "through continuous monitoring" the embassy had not recorded any case of the virus in the students.

UAE: Impact of virus on oil demand should not be 'exaggerated'
The United Arab Emirates' Minister of Energy said the oil market should not overreact to the possible impact of the outbreak on demand.

Suhail al-Mazrouei said he was confident in the ability of China and the international community to bring the current outbreak under control.

Face mask shortage in China boosts sales in Seoul
A shortage of face masks in many Chinese cities has prompted tourists to stock up while abroad.

In the South Korean capital, queues formed outside pharmacies as some of the tens of thousands of Chinese tourists thought to be spending the Lunar New Year holiday in South Korea waited to buy masks.

Al Jazeera's Rob McBride, reporting from Seoul, said "a steady stream of [Chinese] visitors have been snapping up literally armfulls of face masks, filling up the bags and in some instances the cases that they're going to be returning to China with at the end of their holiday".

Gabriel Leung, the head of the Li Ka Shing Faculty of Medicine at the University of Hong Kong told a press briefing that his team's research indicated that there were likely around 44,000 cases in the incubation stage in Wuhan, adding that the rate of infection will double every six to seven days.

"This is based on computer modeling, it doesn't mean it's necessarily going to happen but he said it is a forecast, a sort of worst-case scenario," Al Jazeera's Adrian Brown, reporting from Hong Kong said.

"We are now also considering a possible evacuation of all Germans who are willing to leave," Maas told a news conference, adding that a team from the German embassy in Beijing would arrive in Wuhan on Monday to help Germans there.

Maas said Germans should avoid all travel to China that was not absolutely necessary.

WHO chief arrives in Beijing
WHO chief Tedros Adhanom Ghebreyesus has arrived in Beijing for talks on the outbreak, the health organisation's office in Beijing confirmed.

He is scheduled to meet representatives of government agencies and other experts who are involved in the crisis management efforts.