We are pleased to inform you that KICS (Al-Khawarizmi Institute of Computer Science) is organizing a seminar on Robotics on Oct 14, 2019 at 3:30 PM in KICS Seminar Hall. Prof. Karsten Berns and Dr. Zuhair Zafar are the invited speakers. Abstracts of talks and brief bio of the speakers are given below: 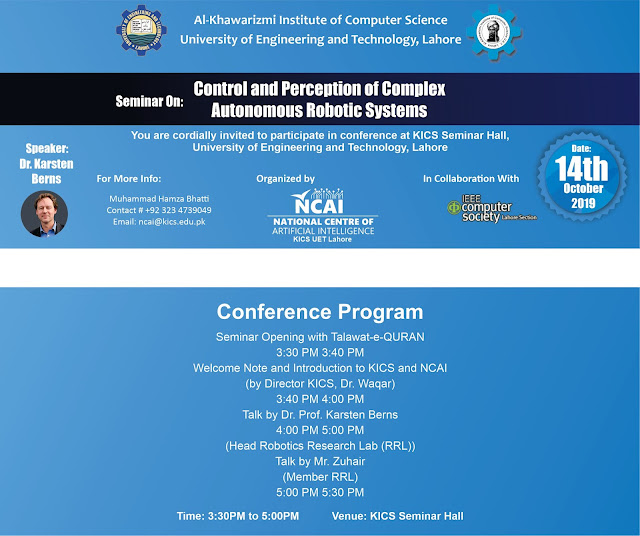 
Abstract: The operation of commercial vehicles has increasing demands on efficiency, safety and quality. Especially in the domain of autonomous off-road robotics ranging from agricultural robots, construction machines to rescue vehicles of different sizes. The research includes sensor processing, localization, path planning and navigation in these challenging outdoor areas. One example of the research activities is the off-road robot RAVON which is driven by 4 electric motors and was designed to test autonomous navigation in forested terrain. Furthermore, we are also working on perception algorithms for commercial vehicles e.g. obstacle detection for a semi-autonomous tractor or the detection humans next to a garbage collection truck. The research in the field of indoor robot focuses mainly on the exploration of unknown areas of buildings. For this purpose, different basic methods have been developed that allow time-efficient exploration. Thus, for example, a larger floor in a typical office building can be detected and mapped for subsequent transport or monitoring tasks completely automatically with sufficient accuracy. In the field of humanoid robot research, biologically motivated control approaches for bipedal running are investigated as well as emotion-based interaction mechanisms using humanoid robot, ROBIN.


Biography: Prof. Dr. Karsten Berns is a full professor at TU Kaiserslautern since 2003. He received his PhD from University of Karlsruhe in 1994. He was the head of the IDS department of the FZI Research center for information and technology till 2003. During his time at Karlsruhe, he examined adaptive control concepts for different types of service robots. His present research activities are realization of reliable, complex autonomous robotic systems. He has also served as a Dean of the department of computer science at the University of Kaiserslautern (2007-2010).

Biography: Zuhair Zafar is a Ph.D. student in the department of computer science at TU Kaiserslautern, Germany. He graduated with Electrical Engineering in his bachelor in 2011 from GCU Lahore. He completed his master in Computer Engineering from LUMS in 2013. Since 2014, he is associated with robotics research lab and working in the field of Human-robot Interaction. His area of research includes emotion and behaviour analysis of humans in the context of humanoid robotics.

A flyer of the seminar is also attached for information. The researchers are encouraged to attend the seminar.
#COMPUTER #Guest Post
Bagikan
Komentar