How to create Django Project - BOOKC -->

How to create Django Project

Now that we have download django and installed setup properly on our computer. Now we are going to create very first django project. The process of creating django project will be same every time when you create new django project. 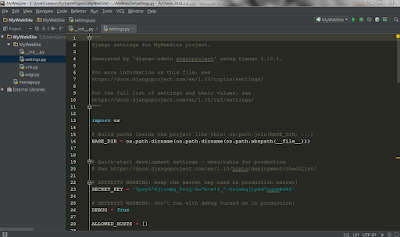 So this is the tool we got, whenever we download django and installed it. This will allow us to do very cool things during our project phase.

In project name you can write any name for your convenience for your first django project. But for this tutorial I give name this super generic "MyWebSite" and hit enter.What the django-admin command did this, it create a folder or directory named "MyWebSite" in our given location.

As you can see that our first django project is created now it's time to explore this newly created directory. Before going to explore, I am going to just open this folder in pycharm IDE. Actually Pycharm is an IDE that JetBrain Company makes. And this is the coolest IDE in the world.
Guys one more thing if you are using pycharm than you can create django project using IDE instead of using django-admin command in command line tool. Steps to create django project using pychar IDE. 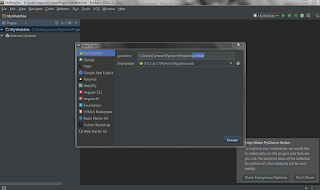 So there are two ways to create django project the first one is using command line and the second is by using IDE. You can choose any way to do that.

Here MyWebSite is just the container where all of the files exist related to django project. It doesn't mean anything to django. The important files are located inside the container (MyWebSite). What is manage.py in django project

Before talking about this file I give you warning:
Its program that comes with django and you can do bunch of cool stuff with this file. It allows you do things like access database, create users etc. Again!!!! This is the file which we never change or touch.
Now you guys thinking that where the file where we work is. So these files are located in child directory named MyWebSite. So go ahead and talk about such files. 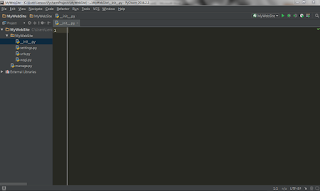 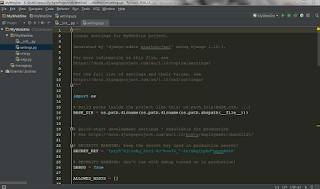 This file is just the setting in configuration option of you website. So it owns overall settings of your entire website. 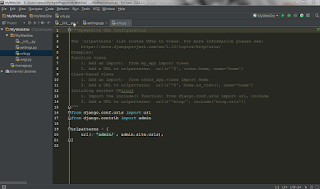 Now the next one is urls.py. These are the url declarations, in other words it's kind of table of content for your webistes. Let me exaplain that whenever you go to a website you type the website name for example website_name/about/ or website_name/home/ etc, so this part (/about/ and /home/) of url tell my website how to behave or what to do when this url called. Some times when you go to the url like logout from any site than it just actually perform some functionality and just logout the user and doesn't give you the web page.

The next one is wsgi.py. This is the web server gateway interface. It is the special type of web server. We learnt about this file a lot later. Don’t worry about right now.
That's the basic introduction of core django project. Every single website in django is composed of above files. So remember that's not enough its just starting overview. Whenever you installed django and setup the django project like we have did, it actually comes with a web server, that you can use for development. So if you want to check out what our websites looks like that we have created follow these steps.

How to run first django project


Make sure you see your project name and manage.py. Now we are going to use manage.py to open or boot our web server. In order to do this type 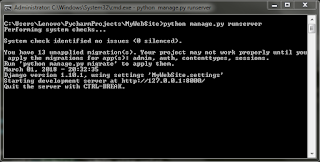 Just open above url on your web browser you see below screen right there.

If you see above screen its mean that you have created your very first django website.
#Django
Bagikan
Komentar