How to install Ionic on windows - BOOKC -->

How to install Ionic on windows


article we may develop on app for different platforms (Windows Phone, Android, IOS) . Here we develop Android app using Ionic1 and Cordova. Ionic has different version such as ionic1, ionic2 and ionc3 the most recent version of ionic is ionic3, but here we start from ionic1.

1- To install Ionic and Cordova we need to install NodeJs. Download latest NodeJs from their official website and install. 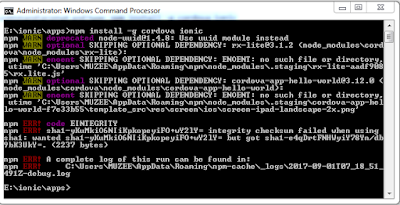 Note: To check that ionic or cordova installed successfully or not run below command in cmd.

Now that we have installed cordova and ionic in our local machine in my next article we will setup
Environment for Android Applications .
#Android #Cordova #Ionic #IOS #NodeJs #Windows Phone
Bagikan
Komentar